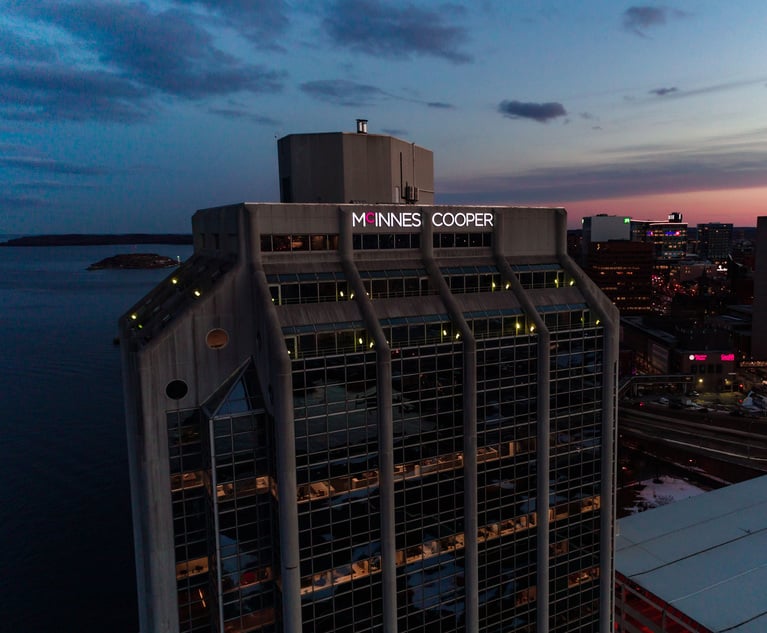 McInnes Cooper is now one of the 25 largest firms in Canada, with seven offices in the country’s four easternmost provinces—Newfoundland, Nova Scotia, New Brunswick, and Prince Edward Island. The merger with eight-lawyer Breton Law Group, based in Sydney, Nova Scotia, is the firm’s first combination with an outside firm since the late 1990s, Kiley told Law.com International.

“We’re in growth mode,” he said, and Cape Breton Island in the northeastern part of Nova Scotia was attractive due its dynamic economy and the fact that no other large law firms have an office there.

“It’s anticipated to have a little over a billion dollars and infrastructure investment in this region in the next six-plus years,” he said.

As part of its growth strategy in Atlantic Canada, Kiley said McInnes Cooper looked at which firms were “players in the business community, players in the social fabric down here,” and saw The Breton Law Group as the leading law firm in the area.

Merging with business-focused Breton Law Group will allow McInnes Cooper to leverage an established local presence to take advantage of commercial opportunities in the region, Kiley said during his first visit to the “new” Sydney office.

“This is an unprecedented opportunity to expand our service offerings to existing and prospective clients at both firms,” said James Gogan, a partner at The Breton Law Group.

The deal was first announced in late August and became official on Sept. 6. In addition to the eight lawyers joining McInnes Cooper, there are 14 staff members in the Sydney office, which has a client portfolio spanning municipalities, energy, telecommunications, education, and work with Indigenous communities.

Kiley said McInnes Cooper is an integrated firm with a single profit center, and the new location allows it to better serve clients from additional centers in the region. The firm also plans to grow the size of the new office.

“We think that having a regional platform will make it easier to recruit lawyers and others to this area, because there are certainly lots of people who want to work in Cape Breton,” he said, adding that joining a 200-lawyer firm means they can still work on substantial files but live in a smaller community.

While the firm is still on a growth path, there are currently no plans to open another office, Kiley said, adding that this could change.

“If there are opportunities with other lawyers or groups of lawyers, you know, we’re interested in exploring those opportunities,” he said.