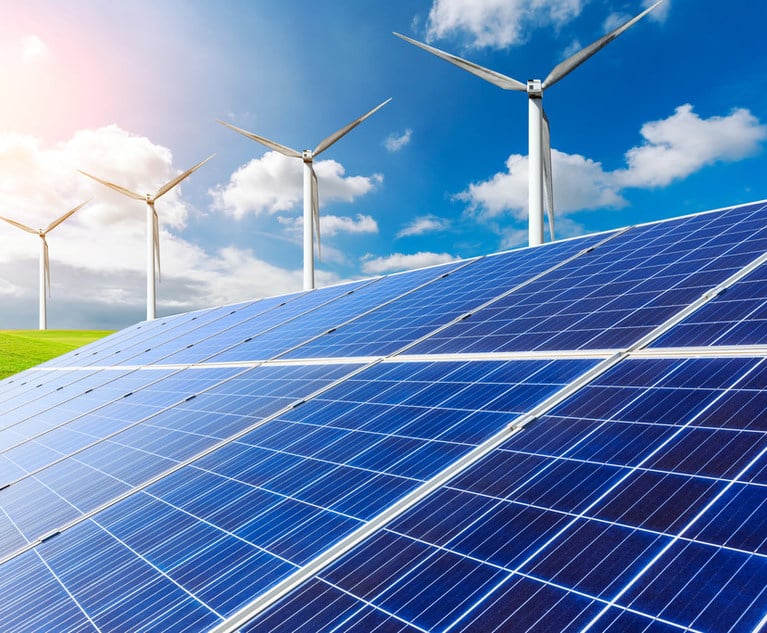 Despite a general cooling in the legal market, Big Law attorneys are optimistic that work will continue to bloom in the energy sector, with a particular eye toward renewables.

“We’ve reached a tipping point in the industry where there is confidence that energy transition has real staying power,” said Tony Toranto, leader of the energy, infrastructure and project finance team at Los Angeles-born Sheppard Mullin.

Certainly, California has one of the most advanced economies when it comes to the transition, with tax credits and other incentives aimed at increasing the development and deployment of green energy such as wind and solar as well as more nascent technologies.

But Toranto attributed this staying power to a convergence of factors that have eclipsed a single market. Policies at the state, federal and international levels are coming into play, as is demand related to “very practical needs,” such as how to deliver power in specific quantities, exactly when and where it is needed, he said.

In order to meet net-zero targets by 2050, the investment in clean energy must more than triple to about $4 trillion by 2030, according to a report from financial market data firm Refinitiv.

And Lauren Collins, a tax partner at Vinson & Elkins in Los Angeles, described the momentum behind green energy as “a speeding train that can’t be stopped.” And while she used to worry about “pigeonholing herself” within the sector, she says it’s a concern of the past.

The sector is garnering interest from traditional private equity oil and gas investors as well as developers and financial sponsors, according to Collins, all of whom want to be “part of the energy transition” and are paying close attention to environmental, social and governance (ESG) requirements as it relates to the sector.

Wind and solar projects remain the bread-and-butter work of the renewables world, but investors and businesses are also pursuing opportunities in electric vehicles, and emerging sectors such as hydrogen and carbon sequestration.

Vinson & Elkins’ work runs the gamut, according to Collins, who noted that her team from Wilson Sonsini Goodrich & Rosati joined the new firm because of its strength in the traditional oil and gas energy and its push to pursue work in renewables.

“At the end of the day, the firm knows how to finance energy projects and structure energy transactions. It’s natural that they’d take those capabilities and apply them to new technologies, many of which are getting their underlying financing from parties involved in the traditional energy deals,” she said.

For instance, the firm has worked with Goldman Sachs Renewable Power on more than a dozen transactions, including a battery storage project in partnership with ChargePoint and the acquisition and financing of the Slate solar and energy storage project in California, which is one of the largest solar projects in the state.

In the realm of hydrogen, to take another example, there is an “increased appreciation that producing large-scale green hydrogen could be one of the most efficient ways to provide and address the clean power needs of the future,” Toranto said.

He said Sheppard Mullin is working with clients on creating a hydrogen hub in Southern California, which is one of several locations that has been earmarked by the federal government. He noted these large-scale projects require participation from a variety of players involved in the production, transportation, delivery and storage of power.

As more parties embrace alternative energy, a number of Big Law practices beyond corporate are catering to the sector.

Sheppard Mullin has invested in the past decade in building a “soup-to-nuts” practice that runs across real estate, permitting and project finance, M&A, regulatory, litigation and even intellectual property.

Work with and against utilities companies is also fueling demand at Baker & Hostetler, which launched in Northern California in large part to help pitch the mega bankruptcy case of PG&E.

During the PG&E case, “we got a crash course in utility wildfire litigation, and that has directly led to additional work,” Morris said.

The San Francisco office is helmed by white-collar partner Robb Adkins, who has led a number of prosecutions in the energy sector including the criminal trial against Enron’s CEOs in the wake of its collapse.

Currently, the office is representing a large energy producer as well as fire victims and timber producers in the state of Oregon against Pacific Power in connection to the Archie Creek Fire.

While California’s regulatory environment has evolved at a rapid pace due to climate-related events, Morris said she does not believe these challenges are unique to the market. She pointed to the winter freeze that left millions without power in Texas last year as just one example.

When dealing with natural disasters, clients are seeking teams of regulatory, litigation, white-collar, tax and even restructuring experts to respond to a crisis rapidly, she said. And these disasters are causing companies to think differently about how they buy and sell power while avoiding creditor issues.

“All of these unique issues, some of which are tied to the weather, present unique challenges to various industries,” Morris said. “But they are making the energy sector ripe for needed legal work right now.”