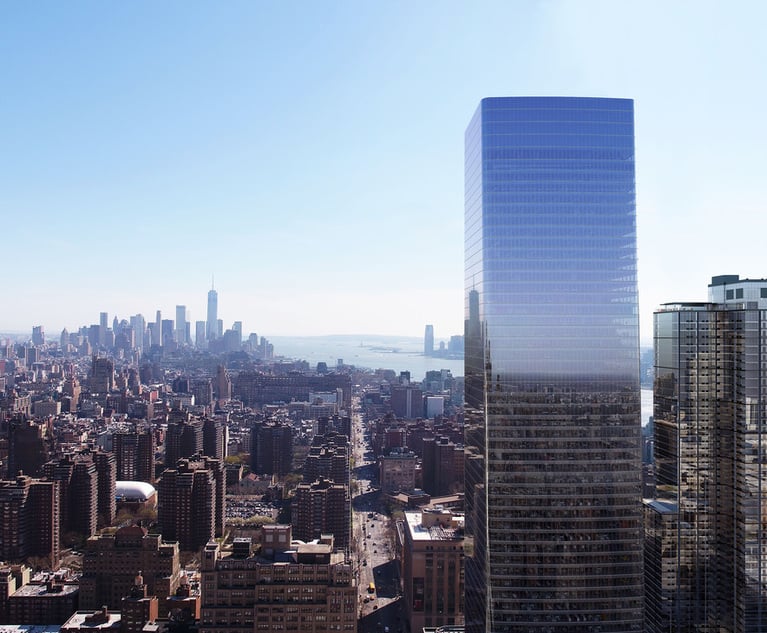 Clifford Chance is moving its New York office and cutting space, the latest in a series of Big Law announcements after firms assess the future of in-person work after a slower start to the year.

Clifford Chance said Tuesday it will relocate about 500 employees to a new skyscraper, Brookfield Properties’ Two Manhattan West, a building that is under construction and set to be finished next year. Clifford Chance is leasing 144,000 square feet in the office, between floors 39 and 42, and will begin moving its workforce there in 2024, the firm announced Wednesday.

The new space is smaller than its current home at 31 West 52nd St, which comprises 189,474 square-foot of space.

Clifford Chance will join Cravath, Swaine & Moore in the building. The Wall Street law firm said in 2019 said it would anchor the building around 2024, occupying 13 full floors and covering about 481,000 square feet. The firms’ neighbors will include Skadden, Arps, Slate, Meagher & Flom and McKool Smith, which both have leases in the neighboring office tower at One Manhattan West.

Two Manhattan West is set to be 58 stories and 1.9 million square feet and will feature amenities such as bike storage with lockers and showers, a fitness and wellness center, conference centers, and private parking, along with a 3,200-square-foot landscaped terrace, according to a release. ”This is an exciting opportunity to build out a space which reflects our ambition for continued growth in a priority region for the firm,” Evan Cohen, Clifford Chance’s Americas managing partner, said in a statement.

The announcement of a 144,000-square-feet office lease comes after a slower start in law firm leasing activity in the first three months of the year. According to a report last month from Savills, not a single law firm signed a lease for more than 100,000 square feet during the first quarter of the year. Some firms are also going out of their way to decrease their footprints by signing leases in newer buildings that are arguably better designed for hybrid work.

However, the legal industry may still be relatively bullish on real estate. Law firm employees are returning to offices almost 30% more than other sectors, according to data compiled by Kastle Systems and noted in the Savills synopsis. Several firms last year also committed to office spaces in big markets such as Chicago and Los Angeles.

And firms such as Willkie Farr & Gallagher, O’Melveny & Myers and Romer Debbas have recently made moves doubling and even tripling the size of their current office setups.

Willkie announced in April that it was doubling its space at 300 N. LaSalle in downtown Chicago, where it first launched at the start of the COVID-19 pandemic in March 2020. The firm said it was adding another 25,000-square-foot floor and that construction would begin by the end of this year.

New York City real estate firm Romer Debbas, fresh off its merger with Katz & Matz, announced that it was doubling the size of its space at 275 Madison Ave.

And in an announcement last month, O’Melveny & Myers signed a lease in Dallas that would triple its office space to 75,000 square feet. The firm will join Haynes and Boone among others in a 27-story office tower set to be completed next year.