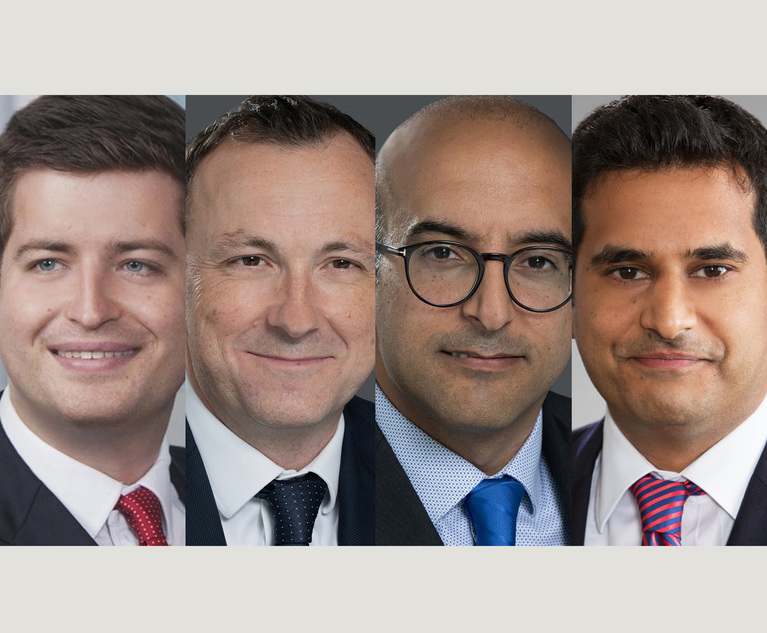 Paul Hastings has high ambitions for the four-partner finance team the firm lured from Latham & Watkins in London this month, noting on Monday that the group “brings key lending relationships with virtually every major investment bank and private credit institution.”

The firm has named Mo Nurmohamed, who was co-chair of Latham’s London finance department, a co-chair of Paul Hastings’ global finance practice, along with existing co-chairs Jennifer Yount and John Cobb. He arrives alongside partners Ross Anderson, Karan Chopra and Rob Davidson from Latham.

While Paul Hastings managing partner and chair-elect Frank Lopez would not comment on the size of the group’s book of business, he said the team is “number one in their market” and that they have “significant market share and I would expect the business to reflect that.”

“We expect this group to have a large and exponential effect, not just in the London market, but through synergies with our practices in California and New York,” Lopez added.

The firm would not comment on whether other personnel, such as junior lawyers who worked with the partner group at Latham, would be making the move with them.

Paul Hastings is adding depth to a practice area it has previously identified as a core strength. Lopez has said that the firm’s ultimate goal is to be in the “top three in each of our major practices,” such as M&A, finance and capital markets. The group from Latham brings them closer to that end game, he said, while also providing a strong platform for the team.

“We are one of the few firms in the world that can touch the entire financial continuum,” Lopez said.

“For a group like this, we are a firm where finance is the lead singer,” he added. “There are other firms that are phenomenal in finance but it might take a back seat to some of their other practices.”

Meanwhile, the move continues Paul Hastings’ high-profile hiring strategy this year.  While the firm hasn’t necessarily increased its number of new hires, it is adding more notable names and making more of an impact in recruiting competitors’ top talent.

“It’s all bout momentum,” Lopez said. “We are at an interesting moment where the broader legal market is contacting, but we look at this year and we could be up this year based on demand and trajectory.”

Nurmohamed had been at Latham for over 12 years. He was previously an associate at White & Case, Winston & Strawn and Barlow Lyde & Gilbert.

In an emailed statement, Nurmohamed said the “complementary nature of our teams’ practice” with Paul Hasting’s global platform “allows us to seamlessly integrate and significantly grow and broaden the London finance offering.”

Anderson, who served as global vice chair of Latham’s banking practice, arrived at Latham at the same time as Nurmohamed in 2010, both coming from White & Case.

Anderson said in an emailed statement that Paul Hastings’ growth “has been fascinating to watch from the sidelines and our team is eager to continue to help drive that upward trajectory.”

A Latham spokesperson said the firm thanks the partners for their contributions “and wish them all the best for the future.”

Latham, despite the four-partner exits, is on its own growth trajectory in London, with the firm overtaking long-term leader Baker McKenzie to become the largest U.S.-centered law firm in London by headcount.