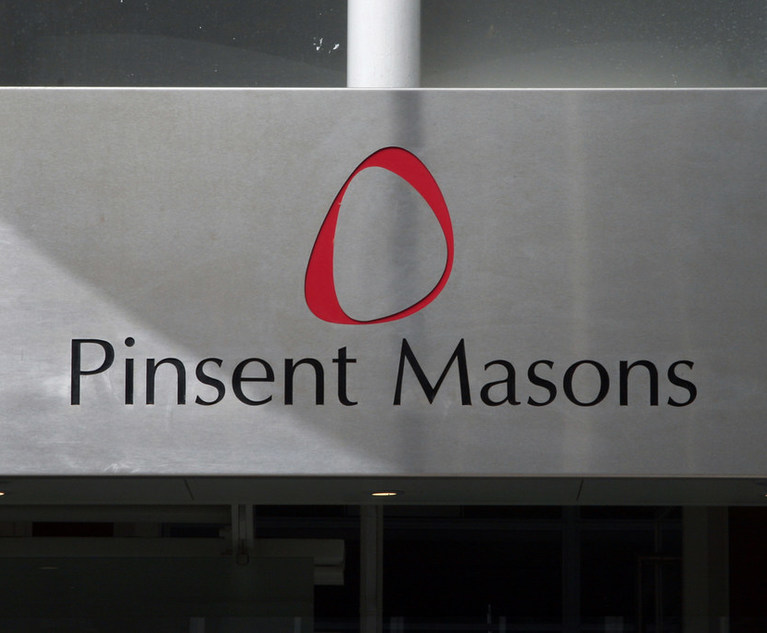 Pinsent Masons is betting on the Asia-Pacific.

The U.K.-headquartered firm appointed its first-ever official head of the Asia-Pacific region and has revamped its Asia-Pacific management, with a new team leading its offices in the region.

“We are in a growth phase,” said James Morgan-Payler, the firm’s new APAC head. “We will keep growing and growing at least for the next five or six years. And I think the growth will be relatively dramatic.”

The emphasis on the Asia-Pacific region comes at a time when the firm’s rate of growth has been relatively slow. In the 2020-21 financial year, revenue increased by less than 2%—the fifth consecutive year in which its growth rate slowed. The firm’s performance in the Asia-Pacific, in contrast, has been a standout. Over the past three years, revenue for the region increased by 20%.

The firm, which specializes in energy and infrastructure, has been busy with energy projects in Vietnam, South Korea, Japan and Taiwan, particularly in offshore wind generation, where it already works for a number of clients in Europe.

“Those projects are so big that they really change the play for us in those in those jurisdictions,” Morgan-Payler said.

In fact, some of the firm’s European wind clients are starting to expand into Asia, which will further boost growth, he added.

And last year, Pinsent Masons advised the developers of a tollway to give motorists an alternative route in crossing the Mactan Channel—one of the largest infrastructure projects in the Philippines. The firm also advised the Asian Development Bank on its 3.7 billion Indian Rupee project financing for the augmentation of a national highway in India, the bank’s first private sector road project in South Asia.

As it looks to grow in the region, the firm plans to expand its projects and finance team and its corporate law practice in Singapore. In Australia, where it focuses on energy and infrastructure and is particularly strong in construction disputes, it plans to build out the corporate team to further augment the project and disputes services it already provides to infrastructure and energy clients.

It also wants to expand in environment and planning, workplace and occupational health and safety, Morgan-Payler said.

But Pinsent Masons will take a targeted approach to growth in the region, he added, looking first at expansion in just a handful of Asian offices. While some firms in Asia have opened as many offices in as many jurisdictions as possible, Pinsent Masons has chosen to focus on a handful of key markets and key market segments, he said. For now, it will stick to its focus on energy and infrastructure and its six offices in the region: in Hong Kong, Indonesia, Japan, Singapore and two in China.

But Morgan-Payler doesn’t rule out further expansion, noting that the firm needs to always be considering its Asia strategy as the market moves and jurisdictions grow hot and cold.

“At the moment, we are where we are,” he said. “But it may be that we end up with more offices in Asia in the future.”

Pinsent Masons currently has 479 partners globally, with 23 in Asia and 22 in Australia.

Its offices in Singapore and Hong Kong—where many developers, banks and contractors have bases—have larger teams and a regional focus, which Morgan-Payler says is more effective than having a small and less-capable office in a jurisdiction just to be able to tell clients it’s there.

In general, teams of lawyers in Asia tend to be smaller and more senior than those in the U.K. and Australia, he said, although that’s changing as some jurisdictions develop. For instance, projects in Asia now require the same amount of due diligence as in other parts of the world. As that progression continues, more international firms are likely to enter the Asian market.

Pinsent Masons has had a presence in the region for decades. It opened its Hong Kong office back in 1983, established a representative office in Shanghai in 2002 and in Beijing in 2007, launched in Singapore in 2009, in Melbourne and Sydney in 2016, and in Perth in 2017.

While demand for lawyers in the region is increasing, the tight labor market isn’t as acute in Asia as it is in Australia, where attracting talent is the firm’s biggest challenge. While the shortage of lawyers is driving up wages, Morgan-Payler is cautious about overpaying for hires.

“You hear stories about silly situations where junior lawyers are getting paid more than senior lawyers because they came in as a lateral and that was what had to be paid in order to attract them,” he said, indicating this is a situation Pinsent Masons wants to avoid.

The firm pays market rates and emphasizes to candidates that there is “all the blue sky in the world” for them to develop careers in energy and infrastructure, he said. It also tells candidates that because the firm isn’t hierarchical, second-year lawyers can find themselves in meetings with partners working on firm and client strategy.

So the concern is not whether the firm will be able to find qualified lawyers as it expands in the region. It is more about where and when to grow.

“You need to be very targeted and know exactly what you’re going into a particular region to do if you’re going to set up an office,” Morgan-Payler said. “That’s something that we’re looking at on an ongoing basis.”