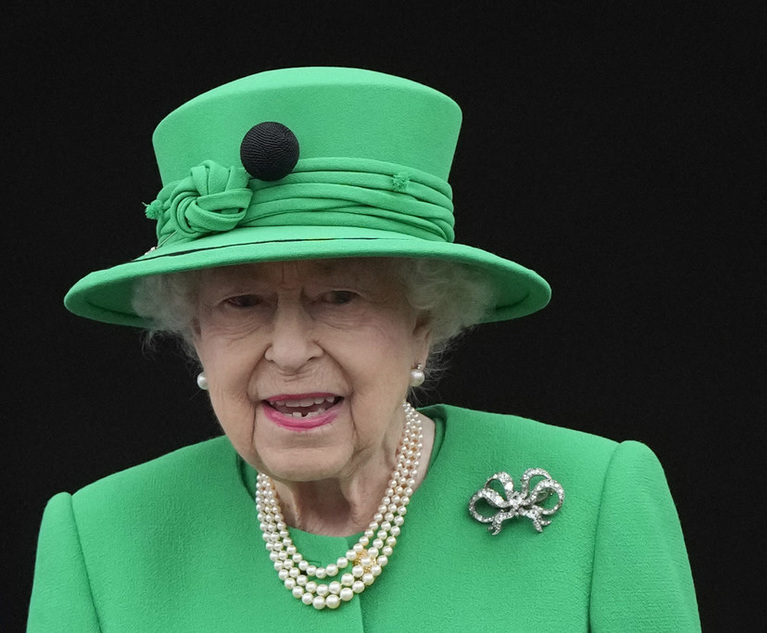 Senior figures in the U.K. legal industry are paying tribute to Queen Elizabeth II following her death at the age of 96 on Thursday.

“On this sad occasion, we share in the grief of the nation at the passing of Queen Elizabeth II. On behalf of the solicitor profession, I would also like to offer our condolences to the Royal Family,” said I. Stephanie Boyce, the president of the Law Society of England and Wales, in a statement.

“As the holder of a Royal Charter, the Society has been very grateful to the Queen for her role in public life, as a defender of the constitution and source of stability in an era of great change. As our longest serving monarch, we’re thankful for the way she dedicated her life to the service of this country.”

“Above all I admired her because she exemplified what it means to serve others. She served with distinction, with empathy and with kindness and always with a lightness of touch and with a refreshing dose of humour thrown in. I am sure that her example will continue to inspire others in our community, across all walks of life, to embrace a life of service. That will be her greatest legacy.”

Speaking to Law.com International, Kathleen Harris, London managing partner at Arnold & Porter, said: “It is extremely sad. She led with dignity, pride, humility and resilience. She was simply an outstanding Head of State and role model.”

“Every change brings its challenges”, she continued, “but all I hope is that as a nation we focus on improving the lives of all human beings and decrease negativity. I am sure King Charles will lead us well.”

She added that Arnold & Porter is a “very supportive firm” and as it reflects on the loss, it will “of course provide support and ensure staff have the time to reflect”.

Baker McKenzie’s global chair of capital markets, Adam Farlow commented: “I was so sad to hear the news. Her Majesty’s steadfast and vocal Christian faith has been an inspiration through so many years. My family and I will be commemorating her at our parish church this Sunday.”

In an email to its London workforce, McDermott Will & Emery’s London managing partner, Hamid Yunis, told staff that its upcoming move to 22 Bishopsgate later this month will be an opportunity to “to honour [Her Majesty’s] extraordinary life in our own unique way”.

He added: “It will be a very sad and upsetting time here and the country will be in shock.  It is hard to believe that after so many years of selfless public service, for most of us throughout our lives, she is no longer here to lead the nation and indeed the Commonwealth. Her Majesty The Queen will be remembered for her graceful presence and the dignity she brought to the highest office and I know her loss will be deeply felt in this country and indeed throughout the world!”

Lincoln Tsang, partner and head of Ropes & Gray’s European life sciences practice, commented:  “It is obviously with great sadness to learn the passing of the Queen. She earned the greatest respect and admiration by many not only in the U.K. but abroad for her life of public service, dedication and duty. She will be remembered for her calm and stabilising influence. The U.K. will continue to evolve with the new reign.”

Stephen Wilkinson, Herbert Smith Freehills’ managing partner for corporate and regional head of practice for corporate, U.K., said: “I have not long heard the news and I am only just starting to digest it. I think for many it will be a long time before it properly sinks in. However obvious it was that she was coming to the end of her reign, it is still a shock.

“It is great that she lived long enough to see the Jubilee celebrations and to know how respected she was, not just in the U.K. and the Commonwealth but in countries we would not register as her admirers.

“It’s far too soon to know the wider consequences of her death in the way you have asked but in a time of potential change, including constitutional change in the U.K., we have lost a very important tie and probably the one person who best embodied a national identity.”

Bryan Cave Leighton Paisner wrote in a statement: “We grieve the passing of the Queen and share in the profound sense of loss felt by so many during this moment of great historical and cultural significance in the United Kingdom and beyond. Beloved by so many, her Majesty was widely acknowledged as representing a reassuring stability amid seemingly constant global change.

“The Queen will also be undoubtedly remembered for consistently living by her values, promoting service to others, and the importance of community ties in her unwavering dedication to the people of the United Kingdom and Commonwealth. Today, these timeless values are worth reflecting and celebrating proudly.”

Penny Angell, U.K. Managing Partner at Hogan Lovells, said: “Queen Elizabeth II was an inspirational figure for me and so many. Her steadfast leadership, which she combined with such grace and humour, was an example to all. I have been touched by the many messages of support and condolence I have received from colleagues around the world.”

In a statement, Freshfields Bruckhaus Deringer said: “We are deeply saddened to learn of the passing of Her Majesty The Queen. Our thoughts and condolences are with the Royal Family at this time.”

Mark Fenhalls KC, Chair of the Bar Council, said: “Throughout a long, loyal, and steadfast reign, Queen Elizabeth II embodied the symbolic role of the figure in whose name justice is carried out with great integrity.

“I have written to offer our deep and sincere condolences to His Majesty The King. Our thoughts are with the Royal Family at this time.”

Tributes also came in from parts of the Commonwealth.

In Canada, attorney general and minister of justice David Lametti said: “Her Majesty Queen Elizabeth II has been a presence in our lives for seven decades. Through good times and bad, she served with grace and extraordinary commitment. Our hearts are heavy as we mourn this difficult loss alongside the Royal Family and the people of the Commonwealth.”

The Canadian Bar Association added: “Her Majesty Queen Elizabeth II has had an undeniable impact on Canadian history. For 70 years, she has been Canada’s head of state and she has been a source of stability in an era of great change.

“Canadians will remember that she signed the Constitution Proclamation, bringing the Constitution home and enacting the Charter of Rights and Freedoms, thus guaranteeing fundamental rights and freedoms for all Canadians.

Jeremy Martin, a partner at the large Canadian law firm Cassels Brock & Blackwell, wrote: “I had a feeling when this day came it would be an emotional one, and I wasn’t wrong.”

In a statement, Gowling WLG Canada said:  “We are deeply saddened by the loss of Her Majesty The Queen. Her life was an unwavering example of constant duty and service to her country and the Commonwealth. Our thoughts are with the Royal Family at this time.”

In Australia, Gavin MacLaren, senior partner and CEO of Corrs Chambers Westgarth, said: “The Queen was a deeply respected world figure whose influence extended across many countries and cultures. Her passing marks the end of an era.”

In June, firms marked the Platinum Jubilee in a range of ways, celebrating 70 years of Queen Elizabeth’s reign.