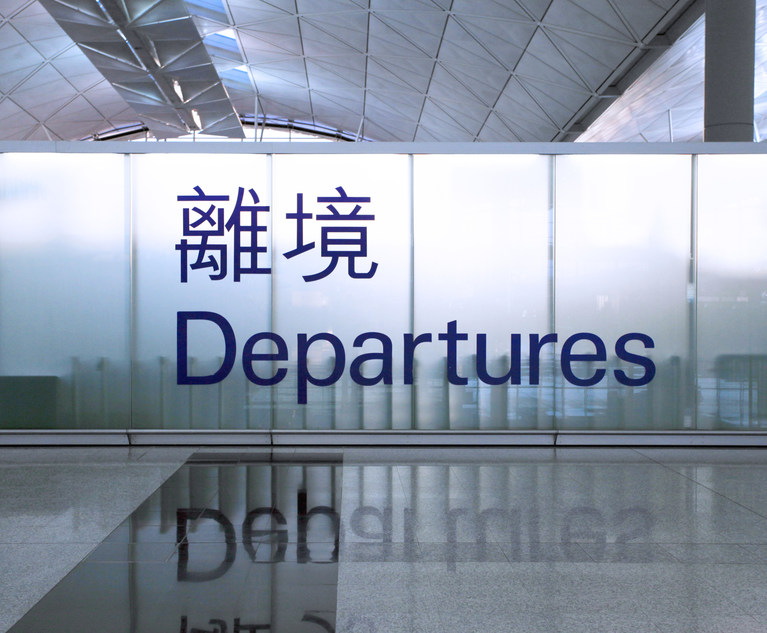 Lawyers who work at international law firms in Hong Kong continue to leave the city—once considered a vibrant hub for global law firms and ex-pat lawyers.

According to research by Law.com International, 26 more law firm partners have left Hong Kong in the past 12 months, adding to the 22 departures first reported in April.

The exits reflect the number of people leaving Hong Kong overall. The city’s population has dropped considerably: More than 113,000 residents have left the city over the past 12 months,  according to recent figures released by the Hong Kong Census and Statistics Department.

“Hong Kong forced my retirement,” said one of the partners who left the city. “Better golf than this,” he said, trying to make light of his decision to retire and leave what he called his “second home.”

Law.com International spoke to five partners who have departed the city, and all of them requested anonymity to avoid potential issues with their employers as well as the Hong Kong government.

All five have said they chose to leave Hong Kong because of the city’s zero-COVID policy, which frustrated and depressed them and their families. One said the policy created a never-ending feeling of “cabin fever.” Another said there was “simply no light at the end of the tunnel.”

One of the partners who finally called it quits and left during the summer holidays had already done four rounds of mandatory hotel quarantines, which in Hong Kong varied between one to three weeks each time he traveled back to the city.

To date, more than 60 countries have scrapped all COVID travel restrictions. In fact, Japan is working towards ending COVID testing requirements for vaccinated travelers and Singapore has taken a further step by announcing this week that the country will drop most indoor mask requirements this month.

Business for lawyers on the ground has also taken a substantial hit. Hong Kong’s economy shrank by 1.4% in the second quarter of 2022 compared with the same period last year. Most of the lawyers who have left the city focused their practices on Chinese deals, and the steep drops in mergers and acquisitions, as well as in Hong Kong initial public offerings work, have forced lawyers to consider alternatives.

According to a PwC report released this week, the value of China’s 6,173 M&A transactions in the first half of 2022 fell to the lowest level since 2014, with a collective value of $237 billion. There were also only 22 transactions worth a billion dollars or more—less than half the number in the same period last year.  “There is little hope for a quick rebound, PwC said in its report.

“The work isn’t really there as it used to be, since the cross-border piece is fairly quiet. And then add on the fact that you can’t travel anywhere—well, not without the madness that is quarantine, anyway. The whole mood is just down, and my family could use a different environment,” said one of the partners who left in the last few months.

For many lawyers considering a new home in Asia, Singapore has become an attractive alternative. Of the 26 who have left Hong Kong, eight relocated to Singapore, including four who took the opportunity to switch firms. Most of the lawyers who moved to Singapore deal with clients in the financial services industry.

According to estimates by Singapore’s Ministry of Manpower (MOM), total employment in the city-state rose in the second quarter of 2022, mainly due to an increase in foreign labor. The MOM, which is responsible for the formulation and implementation of policies related to the workforce in Singapore, said that non-resident employment rebounded strongly from April to June.

“The reality is that when you see your clients—the banks—uproot entire teams of people or departments, moving them to Singapore, you start thinking that’s an in,” said one partner who recently relocated to the Southeast Asian country. “Singapore will never acknowledge outright that it’s benefited from Hong Kong’s predicament but as Boris [Johnson] would say, ‘them’s the breaks.’”

Other senior partners have also left their partnerships, according to the Hong Kong Law Society, although it is unclear if these lawyers have remained in Hong Kong. Amy Lo retired from Clifford Chance, as did William McAuliffe of Allen & Overy, Daniel Chan of DLA Piper and Jackie Lo of Baker McKenzie.

Several other firms also confirmed that partners have left their practices but did not provide further information on whether they have left Hong Kong or if they have joined other firms. These include Deacons’ Myles Seto, Linklaters’ Kevin Cheung, DLA Piper’s Doris Ho and Squire Patton Boggs’ David Goh.