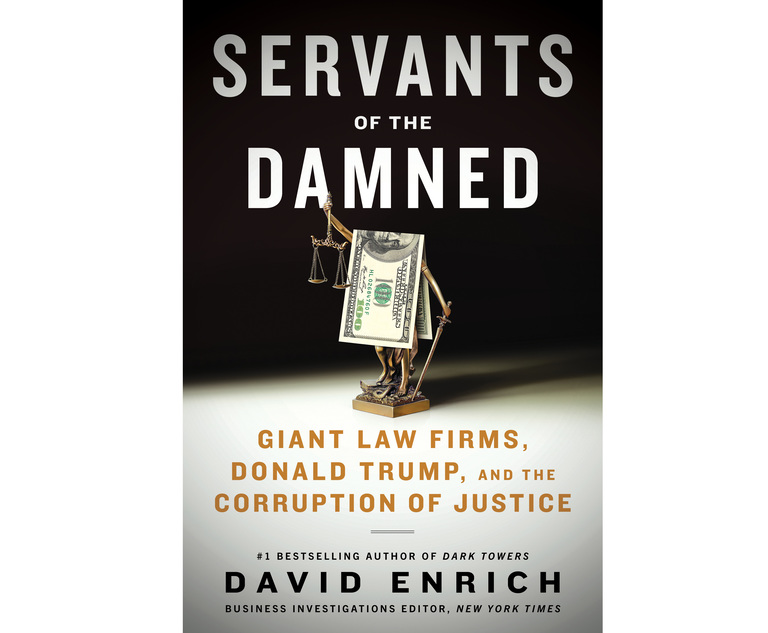 Welcome to the Law Firm Disrupted, a briefing from Law.com editor Dan Packel that surveys new competitive pressures on law firms and how their managers are coping, plus insights on the tactics and tech employed by would-be disruptors. Have an opinion? Email me here. Want to be alerted to this dispatch in your inbox every Thursday? Sign up here.

“From handguns to tobacco,” reads a 2004 headline from the American Lawyer, “Jones Day defends the powerfully damned and the damned powerful.”

But it was Jones Day’s work on behalf of Donald Trump, not on behalf of clients like Colt and RJ Reynolds, that prompted New York Times business investigations editor David Enrich to turn his attention to the firm.

The result, his newly released Servants of the Damned, is a long overdue narrative treatment of the evolution of Big Law in the U.S. Jones Day may be an outlier for having, under long-serving managing partner Stephen Brogan, hitched its reputation to that of the former president. Yet many of the skeletons Enrich excavates from the firm’s closet, as he details its rise from serving Cleveland’s growing railroad and coal companies around the turn of the 20th century to a globe-spanning powerhouse with particularly sharp influence in Washington, D.C., have analogues at its peers.

But the spotlight is on Jones Day, aided by interviews with 180 individuals, mostly current or former attorneys at the firm. The book highlights the plight of a couple with a brain-damaged daughter in order to cast a shadow on the firm’s zealous representation of Abbott Laboratories, the manufacturer of infant formula linked to meningitis. The judge overseeing the trial, which resulted in a finding that Abbott was not liable, called the Jones Day lawyers’ conduct “appalling,” telling Enrich that it “was not pushing the envelope. It was burning up the envelope completely.”

Other scoops include a threatening letter on behalf of RJR that put off a Massachusetts town from a plan to restrict the sale of flavored tobacco—a former lawyer told Enrich “we did this everywhere”—and a recounting of the firm’s attempt to expand into India in the 2000s that apparently conflicted with local regulations ensuring the Indian unit’s independence.

The Abbott case is an opportunity for Enrich to introduce Northeastern University law professor Dick Daynard. He uses the episode as a case study, asking his students whether they thought a particular Jones Day trial lawyer, when in law school, had “envisioned a future in which she would use dubious tactics to defend a giant company against a poor family whose child had been brain damaged?” Daynard’s students invariably conclude that they need to periodically ask themselves throughout their careers if they’re proud of the work they’re doing and if they’re the person they want to be.

Enrich links the failure of law firm leaders to ask these questions frequently enough to two developments in the 1970s: the U.S. Supreme Court case that prevented bar associations from banning lawyer advertising, and the launch of the American Lawyer, now one of our flagship publications. If the former opened the door not just to highway billboards and television ads on behalf of personal injury lawyers but also to well-funded marketing departments in prestigious firms, the latter gave the lawyers a target to chase.

But Jones Day’s work on behalf of the Trump campaigns in both 2016 and 2020 didn’t make the firm rich, Enrich concludes, based on campaign finance filings and his conversations. “We were subsidizing Trump!” one partner told him. Instead, the firm benefited in other ways, with partner Don McGahn installed as White House counsel and playing a major role in reshaping the federal judiciary, including the composition of the U.S. Supreme Court.

The book closes with several associates leaving Jones Day after raising concerns internally about a suit the firm filed following the 2020 elections that sought to halt the counting of certain ballots in Pennsylvania. These exits introduce two larger questions: Will Enrich’s reporting make Jones Day a pariah among promising law school graduates who tilt to the left? And can the idealism of incoming lawyers exert a corrective influence on the wider industry, or will the competitive pressures unleashed nearly 50 years ago invariably triumph?

>> We’re at work on a look at any implications that EY’s plans to break itself up—set for a vote beginning in November—might have on the law firm world. (The accounting giant isn’t a stranger to ethics issues of its own.) But in the meantime, this FT analysis identifies potential challenges for the audit-only successor, including a talent crunch when salaries are likely to be insufficient to land top tax experts.

>> If Enrich identifies the root cause of the talent merry-go-round that’s been spinning particularly fast in the last two years, my colleague Andrew Maloney notes a recent deceleration.  ”We’re no longer in that war-for-talent phase,” Ropes & Gray chair Julie Jones told him. “You always need to keep and invest in your talent, but we don’t have that frenzy, and we see that in our attrition rates.”