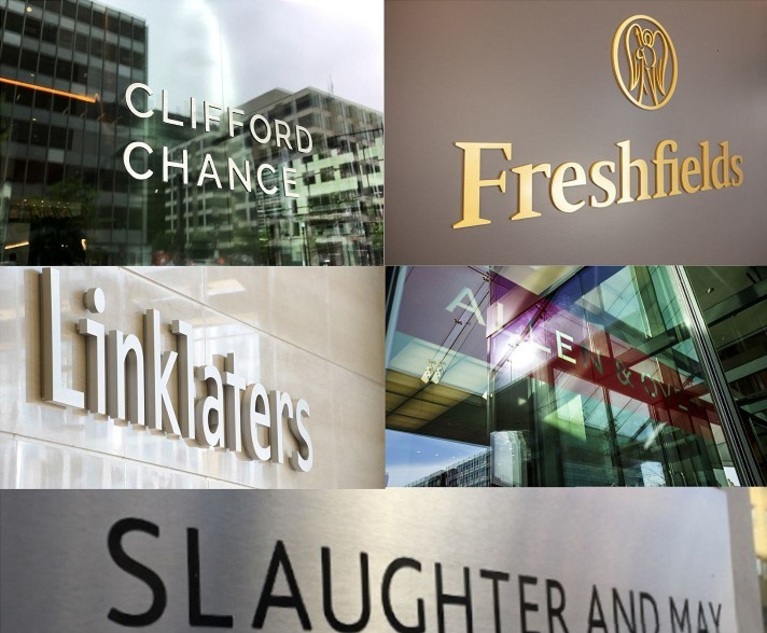 In recent years, one striking consensus among Allen & Overy, Freshfields Bruckhaus Deringer, Linklaters and Clifford Chance is the desire to shift away from being branded as a Magic Circle firm, an informal term from the 1990s that describes the most prestigious London-headquartered law firms.

“An international law firm” or “a global practice” is now a more fitting description, the firms’ leaders say.

“We don’t go out calling ourselves Magic Circle anymore,” said Vicki Liu, Allen & Overy’s Hong Kong managing partner and co-head of the firm’s banking practice. “Ten or 15 years ago, we might say that we’re part of the Magic Circle. But in Asia, that term does not resonate across all our markets.”

In fact, the “Magic Circle” brand has become a bit of a liability. It works against the firms’ ambitions to be seen as global law firms—both as they push hard to break into the U.S. market and as they expand in Asia. In Asia in particular, as the market contends with a myriad of geopolitical pressures and a shifting market, the firms are looking to grow more in Southeast Asia or dig deeper into China.

For a while now, the Magic Circle label has ceased to be a selling point in Asia and has had no bearing on firms winning business. In fact, Freshfields’ Asia managing partner Tom Ng believes the label has led to only one consistent outcome for the firms that have traditionally been part of the group—Allen & Overy, Freshfields, Linklaters, Clifford Chance, and Slaughter and May. It has made them targets for talent poaching.

“We believe that it’s because of that branding that we’ve fallen victim more than other firms,” said Ng, noting that its lawyers with expertise in capital markets, M&A and leveraged finance have been especially attractive to rival firms. “These three areas were the hottest areas and pretty much all those who left went to U.S. firms.”

In Asia, British firms have always had to deal with a broad spectrum of competitors, but in recent months the competition with U.S. law firms in life sciences, technology, private equity, and capital markets has become much more pronounced. The rivalry has also led to an outright poaching war. Scores of senior lawyers have left British firms to join American practices over the past year. Salaries for newly qualified lawyers became untenable, pushing firms like Allen & Overy to draw the line.

The U.S. On Their Minds

The desire to be recognized as a global law firm would be a mere pipe dream were it not for the fact that these top U.K. firms are now finally competing in a meaningful way in the U.S., the largest legal market in the world. But it’s taken a long time for them to figure out a game plan. While they previously sought inroads into the U.S., it’s only in recent years that they’ve made substantial investments there. Allen & Overy has more than doubled its U.S. partner head count over the last three years and now has offices in Boston, Los Angeles, Silicon Valley and San Francisco. Freshfields, Clifford Chance and Linklaters have all also raided their American rivals for lead partners.

But their push into the U.S. market has not occurred in a vacuum. Much of their U.S. growth is linked to Asia, regional leaders say. Despite trade tensions between the U.S. and China, long-term commercial opportunities are impossible to ignore. And U.S. companies are showing an increasing interest in the rest of Asia—a factor that is also a key to growth.

“The linkage between U.S. and Asia practice is going to be very, very critical. Going forward, we foresee a lot of expansion, new partners, and head count growth in Asia with U.S.-qualified partners, said Freshfields’ Ng. “We foresee much of our own growth to be U.S.-centric.”

Even for Linklaters, which has been less aggressive in its U.S. expansion, continued momentum in the U.S. has become a strategic priority.

“In the U.S., we play a bit of a different game because we don’t have the institutional relationships. It’s not about whether or not we are best in the U.S.—that’s unlikely,” said Linklaters’ Liu. “But oftentimes, when a U.S. firm has done a deal across from us and they have an institutional investor looking for help in Asia, our in-depth local knowledge here plus the execution standard means we are stronger than any of our competitors.”

So far, Allen & Overy, Clifford Chance and Freshfields have released their revenue and profit numbers for the past financial year. Clifford Chance, which has five offices in Asia and two offices in Australia, reported that 17% of its global revenue came from its Asia Pacific operations. Linklaters, which hasn’t yet published its financials, told Law.com International that its Asia contribution to revenue accounted for more than 15%. The others declined to provide their Asia revenue breakdowns.

The biggest areas of growth in Asia over the past year were similar for the firms. Most were busy helping clients raise capital and transition their businesses with environmental, social and governance (ESG) principles in mind. The effects of the COVID-19 pandemic have been a catalyst for major restructuring and insolvency matters that have also created a significant stream of revenue. Their client sectors are similar as well, with most of the work concentrated on advising financial investors and sponsors, and clients in the life sciences and technology industries.

But like global markets elsewhere, the pandemic and geopolitics hit Asia hard. In Greater China in particular, firms are being forced to contend with nuanced risks and challenges. The likely delisting of Chinese stocks from American bourses will further exacerbate trade relations between the two countries. Greater China’s unwavering zero-Covid strategy coupled with Hong Kong’s political predicament has also triggered an exodus of people.

The legal sector has watched as their clients—mainly financial institutions and international conglomerates—uprooted whole business units, shifting them to Singapore. Western investors, as well, are increasingly looking to Southeast Asia for investment opportunities. Allen & Overy, Linklaters, Freshfields and Clifford Chance have reacted accordingly by boosting their head counts in Singapore. U.S. firms have also made a push in Singapore.

“We are also looking at focusing on Singapore, not just as a hub for servicing Indonesia and Malaysia but for the wider Southeast Asian market,” said Freshfield’s Ng. “We certainly have plans to develop more resources there and grow the strength in the Singapore office.”

Freshfields has the smallest head count in Singapore, with 22 lawyers including seven partners on the ground—a fraction of the number the other three firms have in their Singapore offices. In fact, Freshfields only relaunched in Singapore in 2012 after first shuttering in the city-state back in 2006.

But Ng said this does not put the firm at a competitive disadvantage.

“We increasingly see ourselves as competing with the leading U.S. firms in this world rather than the traditional Magic Circle competitors,” he said, demonstrating just how little the Magic Circle label means in the region. “And if you look at the U.S. law firms in Asia, their footprint is more similar to ours.”

In China, For China

For Slaughter and May, the more conservative of the Magic Circle firms, an expansive head count and footprint is not a priority. In the past year, the firm, which has only four offices globally, including two in Greater China, has been advising on M&A and capital markets transactions, particularly involving Chinese firms that have delisted from the U.S. markets. It has also seen growth in the regulatory and compliance space as well as in competition law.

The firm has not expanded its footprint since its Beijing launch back in 2008. It has, however, recently been rumored to finally be mulling an expansion in mainland China. The firm declined to comment on the matter, although Hong Kong-based partner Benita Yu did confirm that the practice will continue to focus on the Chinese market.

China’s latest “In China, for China” policy, which focuses on expanding the domestic market and reducing dependence on foreign markets, will likely lead to further expansions or tie-ups by foreign firms with local law firms in the Chinese free trade zones in order to seize local market share. Freshfields has also been rumored to be considering a tie-up in China, either in the Shanghai or Shenzhen free trade zones. Ng declined to comment.

Allen & Overy and Linklaters have already established joint ventures with local law firms in Shanghai. Free trade zone plans for the other three firms remain to be seen, Clifford Chance, for one, has left the door open for such a possibility.

“In China, we are a market leading practice, and we definitely want to continue to maintain that and grow that,” said Connie Heng, the firm’s Asia managing partner. “Candidly, we are constantly on the lookout for opportunities—because you kind of need to have the right partner to tango.”