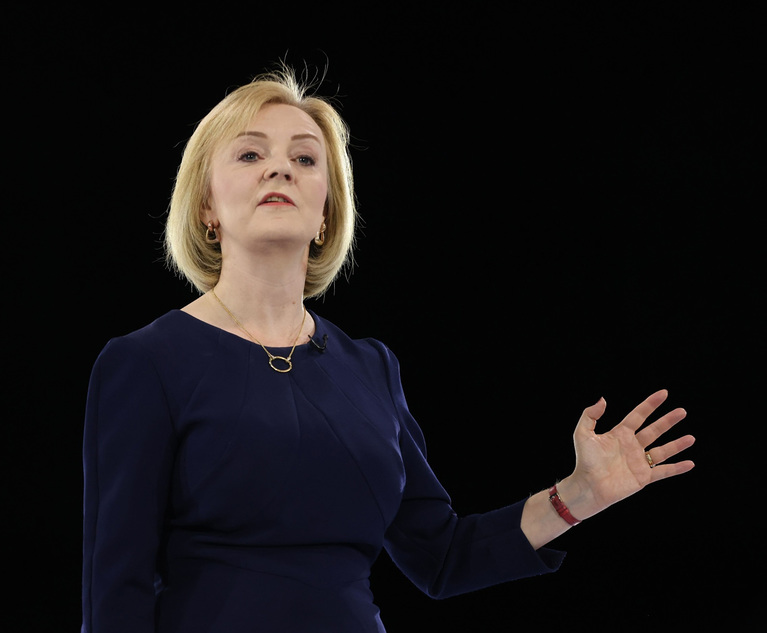 Today’s news that Liz Truss has been appointed as the next U.K. prime minister has largely been met with disappointment by the U.K.’s commercial legal industry.

Asked what they thought of Truss’s appointment on Monday after she won the battle against Rishi Sunak for the top spot of Conservative Party Leader, a partner at a U.K. top 50 firm had some choice words: “Calamitous. Talentless, charmless, third rate, opportunistic and unscrupulous.”

A London partner at a U.S. firm in London described Truss as a “dangerous ultra-right-wing reactionary” and is not hopeful for the impact on the country, while a second partner at a U.K. top 50 firm simply said: “It’s a disaster”.

“She is inadequate to the task. The likelihood of a Labour government in 2024 has just gone up by a large percentage”, another respondent said.

The underwhelming reaction follows the legal industry’s general displeasure about the government as Prime Minister Boris Johnson resigned in July. In August, a snap poll of over 40 lawyers found that the vast majority were in favour of Sunak, with one lawyer describing Truss as “a pound shop Thatcher”.

But not all of today’s reaction was negative. A former U.K. law firm managing partner believes that Truss should be given a chance to succeed, noting that the PM role is “not an easy gig”.

Pointing to the “complex and long-term issues” facing the U.K. currently, such as the energy crisis, they added that Truss is “hopefully a leader who can get us through it”.

Meanwhile, Andrew Hood, a regulatory and trade partner at Fieldfisher, told Law.com International: “With her experience in the Department for International Trade and the Foreign Office she will recognise the importance of a dynamic open trading economy.

“As one of the main proponents of strong sanctions against Russia we can expect those to remain, but otherwise business remains hopeful that we will see more trade deals secured around the world to help support U.K. exports abroad and contribute to tackling the cost of living crisis at home.”

Lawyers will keep a keen eye on what Truss may have planned for the legal sector. Several partners told Law.com International they’d be looking for Truss to tackle the criminal justice system crisis with meaningful funding.

In a statement on Monday, Law Society president I. Stephanie Boyce, called on Truss to demonstrate a “a renewed respect for the rule of law at home and with international partners”, adding: “Our criminal justice system is facing a make-or-break moment with huge backlogs in the courts delaying justice for victims and defendants, while chronic underfunding is forcing solicitors to leave this area of work in droves and leading to the collapse of our vital network of duty solicitor schemes.”

Other issues to focus on will be the cost of living crisis, the Brexit fallout and a commitment to upholding the rule of law, respondents said.

Truss was justice secretary in 2016-17, a stint marred by criticisms which included that she was not protecting the independence of the U.K. judiciary, before she was replaced by David Lidington.

A partner at a top 50 firm commented: “Her performance as justice secretary was lamentable, particularly her failure to back and support in a robust public manner the unacceptable labelling of the relevant judges as ‘enemies of the people’.”

The partner would like to see the government distance itself from its longstanding view that the judiciary are “irritants”, particularly as “all they are doing is interpreting and applying the law largely promulgated by Parliament, albeit more recently not a lot of that legislation has been thought through properly”.

Another person added that they want Truss to “stop the dangerous attacks on lawyers who are doing their job in holding administrative and governmental decisions to legal account”, while another respondent is looking for a “renewed commitment to uphold human rights and to the relevant international institutions”.

Alexander Campbell, a barrister at Field Court Chambers, said employment, housing and planning lawyers in particular will be watching closely to see what changes she will bring in based on her campaign proposals. These include a review of workers’ protections, legislation to weaken strike action and the promise to scrap government housing targets.

“It will take time to see precisely what Liz Truss’ legislative priorities in government will be”, he said, “but from the pledges she has made so far on some particularly controversial issues, one thing appears certain: government lawyers are going to be busy in the months ahead.”

This article will continue to be updated.