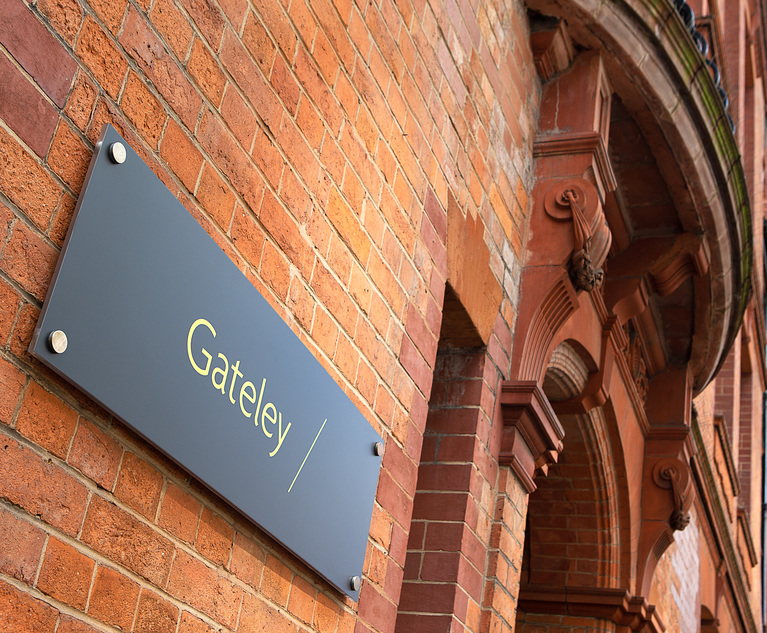 A former partner at U.K. listed law firm Gateley has been suspended from practice after he was found to have improperly accepted payments into his personal bank account from a client.

Former Gateley partner Dean Copley has been suspended from practice for a year and ordered to pay the investigation costs of £12,000 by U.K. regulator the Solicitors Disciplinary Tribunal.

In a hearing on May 30, the SDT found that in January 2016, Copley improperly accepted a payment of £2,500 into his personal bank account from Company A. He then failed to declare the payment of £2,500 to the firm.

The SDT found that in December 2016, Copley sent an email to Company A from his personal email address requesting an additional benefit, “above and beyond any agreed professional fees” for introducing the company to a business partner.

According to the judgement, published in June, Copley’s client “CL expressed dismay at receiving a request for further payment.”

The judgement added: “Seeking to elicit a further such payment from a client, who was already paying fees to the Respondent’s employer, further threatens the public’s trust and confidence in the profession, as well as harming the reputation of the profession.”

According to the judgment, Copley claimed he “genuinely believed he was entitled to accept the gift in January 2016 and that he was unaware of any duty to disclose the same to his employer.”

However, he also agreed he should have been aware of the risks that he was not entitled to the gift and as a result “should have made enquiries with the firm.”

Copley claimed that his December 2016 email had been sent in an attempt to “secure an enhanced or further fee for his employer”, but “accepted the wording of his subsequent email to secure further fees… could be seen as him seeking a financial benefit for himself.”

The SDT noted that Copley had been a solicitor for nearly 28 years at the time of the first of the allegations, had recently been appointed director at the firm, and therefore had “extensive experience, and should have been well acquainted with the rules regarding the acceptance of gifts.”

The SDT suspended Copley from practice for 12 months beginning on 30 May 2022 and ordered him to pay a contribution to costs to the Solicitors Regulation Authority of £12,000.

A spokesperson for Gateley said: “Mr Copley was a real estate partner in our Manchester office between 2010 and 2018. As soon as we were alerted to Mr Copley’s conduct back in 2018 we began an internal investigation, following the robust processes we have in place for dealing with disciplinary matters.

“As a result of that internal investigation, we found that Mr Copley was in breach of our bribery and corruption code of conduct and we terminated his contract with immediate effect and reported it to the SRA. We have assisted the SRA fully in dealing with its investigation. Mr Copley has not been employed by the business for over 4 years and we would also like to confirm that Mr Copley was not a director of Gateley Plc.”

Clarification: This article has been updated to show that Copley left the firm in 2018 and to reflect that he was not a director at Gateley as described by the SDT.